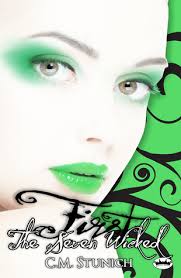 Summary:
“That's just the First," Caleb said, pausing to worry at his lower lip. “And it's only one of seven, Seven Wicked; we can't destroy any of the others until we destroy the First.”When reincarnated goddess, Eevee Marx, sees the necklace at her local thrift store, she just has to have it. But Eevee has no idea that when she drapes the delicate, silver links over her fingers, she is continuing a legend her spirit had started centuries ago. That when she unhooks the tiny clasp and lays the black and silver pendant against her chest, she will spend the night of her seventeenth birthday holding the dying body of the boy she loves.The Seven Wicked have been sleeping, preparing for Eevee to touch the necklace and reawaken the powers inside of her. Now, the only thing that stands between them is Caleb, the golden haired boy who will sacrifice himself to save her
Review:
As I was reading this book, I was thinking… How am I ever going to review it.
You see, this book is very unique. The story line is interesting and
LOOK at the COVER!! (All 7 covers are already released and she plans on publishing the books fairly quikly! And ALL the covers are AWESOME) I mean, this STORY is great… but the book… not so much.
There was just something off. And I kept trying to figure out what it was that was wrong… as I was reading it.
So, you follow Eevee, a 16, almost 17 year old girl (she turns 17 by the end of the book) as she discovers truths about herself (and past lives) meets a boy (who really isn’t just a boy) and tries to stay alive despite being hunted. The Seven Wicked are out and trying to kill her. This is a GREAT plot! The Seven Wicked are seven beings that have been created to kill a goddess who refused to love a god (Very creative story line there! There is no greek mythology, this is all new! Which I loved) And now these Wicked’s are out to kill Eevee. The action starts RIGHT away, and never lets up! And I liked that.
Because the action started right away, I felt like I didn’t know the characters at all, especially the Main character, Eevee. I couldn’t relate to her at all. She seemed more young and naïve than most MCs in YA novels, and I just… I thought to myself at one point, “Who cares if she dies…?” And that’s not good!
I liked Caleb, because we got to learn about him as Eevee did. And he was sweet and kind. But still kinda flat.
The romance seemed… so unreal. So NOT passionate. Its kinda love at first sight- which I hate… and was very unreal. Though it could have been explained away (based on past lives) BUT it just was still too unbelievable.
Maybe my biggest issues was that the entire book spanned just one week. That’s it… And there was WAY too much going on to make it happen in only one week.
I feel like there should have been more back story… and more character development.
ALL that being said, the story WAS good! It had SO much potential to be GREAT! And I am interested enough that I will buy the second book and learn more. But Im HOPING that it gets better and we get to KNOW the characters more, or I wont buy the rest of the series.
Happy Reading!
3.5 stars reviews