There are many ways in which Social Media can have a positive impact on our lives. We can easily communicate with our entire extended family, we can easily share (and gain) knowledge between peers, colleagues, and even people we don’t know, and in a professional way you can build your “brand” whether that’s a product, a persona, or a service by reaching huge audiences.
To offer a specific example, in the city I live in there are groups for mothers on Facebook. It’s actually become kind of a running joke for the local newspaper to quip at any time a rumor is flowing that it must’ve originated from the “Moms groups”. To be fair, sometimes it does happen that way. But there is one specific Mom’s group that does so much good in our community.
Moms of New Braunfels Uncensored started as a group for moms to say whatever they wanted, in a safe way, without being censored by strict administrators or rules. While to some, uncensored may give off a negative connotation, it actually just means that the only rule is to “Not take things real life” (or negatively affect someone’s real life outside of social media.) but you can say anything you want.  One might think that this could open up a monstrous can of worms with nagging women, or bitterness, or fighting. But at its core, this Moms of New Braunfels Uncensored is a group of women who lift each other up and empower other women. The group’s admins Nikki and Rhonda were doing so much good, they even filed the necessary paperwork to be declared a non-profit. They are constantly cycling through local donations and requests for help. Every Thanksgiving moms all gather together to donate and prepare meals, they list children for “adoption” at Christmas for Moms to purchase gifts for children who otherwise wouldn’t receive, and so much more. They have monthly raffles, where they raffle off items that have been donated, for money to put into the “fund” that can later be distributed for other moms in New Braunfels. They’ve helped pay rent to avoid foreclosure and eviction, helped pay car payments, other bills, and more. Moms with small businesses can promote their products or services, and other local moms support them. It’s a virtual community supporting our actual community. As defined by the admin: Moms of New Braunfels Uncensored has been able to help so many and is the perfect example of how Social Media can positively impact society. Authors Note- This is a private facebook group and cannot be viewed by non-members. The Public Moms of New Braunfels Uncensored can be viewed here. I did receive the okay that I could share screenshots from the Admin Rhonda before this post.

Email ThisBlogThis!Share to TwitterShare to FacebookShare to Pinterest
Labels: School

Daaang! Have I really not posted ANYTHING since May?!
Here i am, for at least ONE post this year...

Last year was amazing for us.
We were crazy, and hectic, and chaos reigned supreme, but it was Great!
The good stuff:
We bought a new home! We have way more room, and are super excited about it. Its been very busy, packing, moving, unpacking, and cleaning the old house! But it was obviously a big improvement for us!
Bought a new truck.
Went to Six Flags all year, which was the first year we did anything like that. (Season passes to anything) Totally worth it for all the memories.
I got to go on my first cruise, with my best friend. I really believe that you have to invest in your marriage, so that was awesome.
We got 2 new baby kittens!! Who are a pain in the butt most of time, but who we love so very much!
Dani got the braces she so desperately wanted (and needed). And won 2nd place in the spelling bee!
Max lost his first teeth, AND started big boy school. (For the ONLY year he and Dani will be in the same school, ever!) Tried to have a garden…but only my tomatoes grew. Ha. Still, that was an awesome experience for both me and Max!! He loved going to the garden and picking tomatoes from it! 
Got to stay in some cabins in Kerrville! Went to corpus and rode on a pirate ship!
Chris and I started focusing on our health more... which in turn led me to quit smoking (again. and hopefully for the last time). Exactly 19 weeks since I quit!!
I jogged a 5k probably 50 times last year, and my best time was 33 minutes! Longest distance was 4.5 miles.
And Hillary DIDN’T Win!!! Lol ;)

Goals for this year:
Start my day with a prayer every.Single.day!
Continue focusing on my health!! And don’t give up on me! Get to under 30 minutes for my 5k. Bike more (since I got a bike for Christmas!) And do a 10k.
WRITE again! I haven’t written even ONE word in pretty close to a year. Havent REALLY written in over a year! FINISH The Empyrean Chronicles series! This is a big one for me!!! 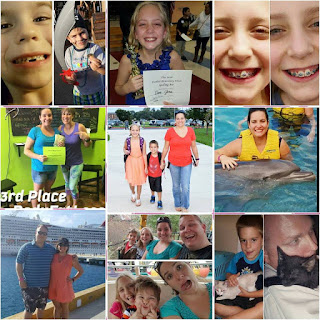 Summary:
I thought I had nothing left to give. I thought wrong. They started the war. Now I will end it.
In the stunning conclusion to the wildly popular White Rabbit Chronicles, Alice "Ali" Bell thinks the worst is behind her... until Anima Industries, the agency controlling the zombies, launches a zneak attack, killing four of her friends. It's then she realises only the worst has only begun.
As the surviving slayers prepare for war, Ali discovers she, too, can control the zombies... and she isn't the girl she thought she was. She's connected to the woman responsible for killing — and turning — her boyfriend's mother. How can their relationship endure? As secrets come to light, and more slayers are taken or killed, Ali will fight harder than ever to bring down Anima — even sacrificing her own life for those she loves.

So... this book was good. A  lot of times the end of a series doesnt live up to my expectations. It doesnt answer enough question, and doesnt leave me feeling satisfied with the conclusion.
I did not have that issue with this book.
However, it still isnt my favorite ever.

Ali is still awesome, and significantly better than she was in book 2 (with the wishy-washy romance and zombie alice trying to take over). She is so much more assertive by the end of this series, compared to the beginning, that I really like her.
The romance between her and Cole, while still having some (new) drama, was so much better than the 2nd book also.

That being said, I feel like their romance (at least some aspects of it) are way too old for a YA book. Sex is in YA, because teens have sex. I get it. But the whole spanking joke... ugh. Also- this is pretty much the only aspect of Cole that I dont like. While I get it, he's used to being in control, and while Ali still resists his super, ultra controllingness, it got so old hearing him always trying to control her.


the plot was solid- though the emergence of Helen was... unnecessary, and not my favorite.
The loss of life in this book was high, though only 1 of them actually affected my emotions. the others were...unimportant.

But really, this was an awesome series.
Satisfying end.
i dont plan on reading the newest book with Frosty's POV- because I liked Frosty in these books and I feel like he'll change way too much.

*Spoiler*- highlight the text to read:
Frosty and Kat were perfect. And I know that he falls for someone in the new book. And I just dont want that. Yes I want Frosty to be happy. But not so soon after the love of his life dies. So yeah, not gonna read it.

Through the Zombie Glass Review

Summary:  Zombies stalk the night. Forget blood and brains. These monsters hunger for human souls. Sadly, they've got mine...Alice Bell has lost so much. Family. Friends. A home. She thought she had nothing else to give. She was wrong.After a new zombie attack, strange things begin to happen to her. Mirrors come to life, and the whispers of the dead assault her ears. But the worst? A terrible darkness blooms inside her, urging her to do very wicked things.She's never needed her team of zombie slayers more, but ultra bad-boy Cole Holland, the leader and her boyfriend, suddenly withdraws from her...from everyone. Now, with her best friend Kat at her side, Ali must kill the zombies, uncover Cole's secret and learn to fight the darkness.
But the clock is ticking...and if she fails at a single task, they're all doomed.

Review:
This book ventured even further than any kind of retelling. I guess I need to just get over that. The only link really to Alice in wonderland is the white rabbit cloud, and the mirror in this one... and her name.
thats about it.
Well, and the chapter titles.

Anyways, This book was not as amazing as the first.
Mainly because of the Cole/Gavin/Alice/all his exes drama. I knew how it was gonna end up (and if i'd been wrong I wouldve been super perturbed) but i wasnt. So the whole middle of this book, in regards to that relationship drama was more than annoying.

Other than that, with the true emergence of Anima and the Hazmats, the story really grew. I loved how much Alice again grew in this book. The subplot about the two halves of Alice was... long. it was too long, in my opinion. and I found myself skimming through a lot of this.

But, it was still a good book. With great world building and characters.

She won't rest until she's sent every walking corpse back to its grave. Forever.
If anyone had told Alice Bell that her entire life would change course between one heartbeat and the next, she would have laughed. From blissful to tragic, innocent to ruined? Please. But that's all it took. One heartbeat. A blink, a breath, a second, and everything she knew and loved was gone.
Her father was right. The monsters are real.
To avenge her family, Ali must learn to fight the undead. To survive, she must learn to trust the baddest of the bad boys, Cole Holland. But Cole has secrets of his own, and if Ali isn't careful, those secrets might just prove to be more dangerous than the zombies.

Review:
So, Alice in Zombieland, while not really an Alice in wonderland retelling at all, is still an awesomely exciting novel.
The beginning of this novel- in the very first chapter- is devastating, and thrusts the reader directly into the feels with Alice.
And the emotions dont stop throughout the entire book.

I liked the characters. Alice grows significantly in the book. and learns from her mistakes.
Cole... is the best ever.
Kat -while at first off-putting and rather annoying- ends up being a sense of happiness in an otherwise sad world.
the lore of the zombies, was new, different, and very perfect. I loved it. completely. I have no qualms at all, in any way, with this zombie world Showlater created.