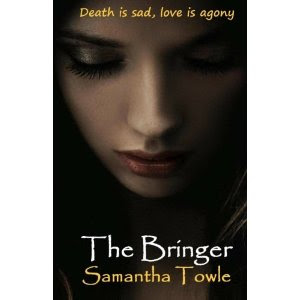 Summary:
Death is sad, love is agony. Max was her next job. She got his name just before he died and it was for her to lead his soul to heaven. She was a Bringer. Then Max started pleading (as they often do), but not for himself, for his son, James. Would she look after him, would she comfort him as he grieved for the loss of his father? James was a sensitive young man. He would take his father's death very hard. Well, Bringers don't do that sort of thing; their exclusive role is to usher souls to heaven. They are not allowed to get involved in earthly affairs. However, when she saw James, she felt something she had never felt before – an emotion, a shock. She was a Bringer. Bringers do not have emotions. Yet she couldn't help herself. She found herself being drawn inexorably towards James and his life, against every instinct she had ever had, against every law of the universe. And she fell in love.
For a Bringer, that is a terrifying fall.
Review:
This was a very interesting story, something different. You meet Lucyna- she is a bringer, a being that brings souls to heaven (very interesting concept BTW) Bringers don’t feel anything-ever, and she when she starts having feelings, things change. She promises one of her “brings” that she will look after his son, and when she does, she falls in love with him. This is very strange because she shouldn’t be able to feel anything ever.
You follow her in her journey as she
figures out they have known each other much longer than just this lifetime, who her real friends are and who are NOT.
Plot: This was a unique plot, with some great twists in it. After she regains her memories, things REALLY change. The book was fast paced, and well put together. Everything unfolded perfectly. I cant really say more without giving away some spoilers, which I don’t want to do.
Characters: The characters were well thought out. I really felt for Lucyna, James and even for the villain (who will remain nameless right now) You see all the pros and cons to each person!
There was action and romance and I even enjoyed the end- even though it just ENDS-pretty abruptly. I would have liked a little more to the romance, but that’s ok.
My biggest dislike- the way they talked. At first you have no idea where the story is set. I’m from the South of the USA- so we talk very different here than they do in London-where they were in this story. Had she mentioned that up front, it would have been easier to understand. They have a lot of sayings there I didn’t quite understand. Also, there were a few grammatical errors and a million and 2 adverbs on every page. (you can read my post on adverbs here)
And one last peeve- there is a LOT of cursing in this book. Now dont get me wrong,I have no aversion to cussing, and sometimes I do cuss too much. But there was a LOT of cussing! Lots and Lots.
Overall- a good book with only minor annoyances that I really enjoyed!