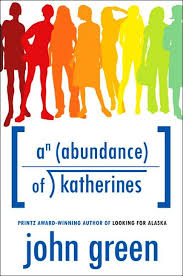 Summary:
From Amazon:
When it comes to relationships, Colin Singleton's type happens to be girls named Katherine. And when it comes to girls named Katherine, Colin is always getting dumped. Nineteen times, to be exact. He's also a washed-up child prodigy with ten thousand dollars in his pocket, a passion for anagrams, and an overweight, Judge Judy-obsessed best friend. Colin's on a mission to prove The Theorem of Underlying Katherine Predictability, which will predict the future of all relationships, transform him from a fading prodigy into a true genius, and finally win him the girl.Letting expectations go and allowing love in are at the heart of Colin's hilarious quest to find his missing piece and avenge dumpees everywhere.

Review:
This is my first John Green book. Since people kept talking about him, I just dropped by the school library and picked out the first one that stood out.
While I wasn't blown away by John Green's brilliance (although I'm holding out for some of his other books), An Abundance of Katherines is definitely a stand-out. It's more of a light-hearted deep than a heavy deep, with a comedic light shone on nearly every incident.
Although the more serious scene are a sharp contrast. Those moments linger.
The prose is also different. For example, the footnotes, which provide everything from translation of Arabic and French to plain old elaborations. The last novel I read with footnotes tried too hard to be an overwrought Lemony, but John Green doesn't try to be Mr. Snicket. Green's his own writer, thank you very much.
Colin isn't like the other male protagonists I've read about over the last year. Colin's a former child prodigy. He sprouts out facts and anagrams. He shows some signs of being an Aspie. And despite being a bit of a jerk, it's hard not to like him based on hard he yearns to leave his mark in the world. Oh, and he pulls a fast one near the end.
Don't forget the side characters! Hassin never takes anything seriously. Lindsey is a more snarky foil to Colin.
Now, a few elements dulled the book. For example, how more than once scene has only dialogue and therefore became harder to follow, along with the tendency to put more than one line of dialogue in the same paragraph, but none are without a purpose.
By the way, this book has some suggestive elements and cursing, it never goes beyond PG-13.
Rating: 4 stars

I would like to thank Chihuahua Zero for coming to my blog and for writing this review!!!
He can be found blogging about writing and reading over at The YA's Dogtown, with consistent tweets at @chihuahuazero

Everyone should go check him out!! :)