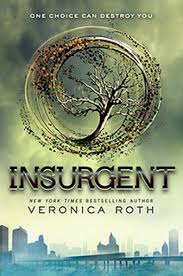 Summary:
One choice can transform you—or it can destroy you. But every choice has consequences, and as unrest surges in the factions all around her, Tris Prior must continue trying to save those she loves—and herself—while grappling with haunting questions of grief and forgiveness, identity and loyalty, politics and love.
Tris's initiation day should have been marked by celebration and victory with her chosen faction; instead, the day ended with unspeakable horrors. War now looms as conflict between the factions and their ideologies grows. And in times of war, sides must be chosen, secrets will emerge, and choices will become even more irrevocable—and even more powerful. Transformed by her own decisions but also by haunting grief and guilt, radical new discoveries, and shifting relationships, Tris must fully embrace her Divergence, even if she does not know what she may lose by doing so.

Review:
So… Again, this surpassed my expectations (and my expectations were very high!) The story starts right where Divergent stops (if you haven’t read that book, you MUST read it! its amazing too. See my review HERE)
Tris, Four, Caleb, Uriah, Christina… all of your (or at least MY) favorite characters from Divergent are back in all their glory… or lack thereof. The book is nonstop action. It goes from one point to the next seamlessly. Tris and the gang go to Amity to try to create peace and stay safe, and then to Candor as well. But that’s not it, you also learn SO much about the factionless. Which is good, because it was an issue I had with the first book… if so many don’t actually make the factions, then what??? They are just poor and lonely forever? Seems unlikely. Well, its explained better in this one.
You learn more about the Divergent and why its actually important! And why Tris is even cooler because she had aptitude for 3 not only 2 factions!
Jeanine Mathews is the Big Bad in this novel as well, but she isn’t the only one… (but don’t worry, I wont spoil any of the awesomeness with my post)
The characters, who you thought you MAY know well, you probably don’t. you learn so much more about each character and the depth of each of them is astounding. People you thought may not mean too much to the plot… really do!!
I still am Madly in love with Four (and I still hate the name.) He and Tris have a real relationship. Its not all lovey-dovey and perfect and dumb like so many out there. You can FEEL their love and loyalty to each other, while at the same time they still have their own REAL issues, like a real couple would.
Im so glad there isn’t a triangle in this book, it makes their relationship stronger.
I will say that I was kinda bummed that Tris is so down and depressed the majority of this book. Though, that’s what makes it so real. No normal human being could go through all of that and be OK. But she managed to stay strong… ish.
Everything feels so real in these books! Like… I seriously am taking mental notes on how to write better. Veronica Roth does an amazing job of showing you what is happening and what they feel without merely telling you. There is no slump, no slow part, the writing is beautiful and perfect! (and Im slightly living in writer envy when I read her books!)
Another thing worth mentioning is the deaths and character CHANGES. Yes… people die. And its war, but Man oh man its sad to read. AND like I mentioned earlier, some people CHANGE waaaaay too much for my liking.
And then it ended… yes, unfortunately there had to be an ending and it couldn’t just go on and on forever. We can all cry about it later. BUT the ending was SO epic! Like.. holy crap people. You know that ONE question, everyone had when reading Divergent??? The one where you are like… Why is this happening in only ONE city??? Yeah… be prepared for a answer (that’s really just a question for more) to THAT question!
Overall, another stunning and heart wrenching YA dystopian novel from Veronica roth that blows away any and all expectations I had!!
Recommend to… anyone who enjoys a great book. (so… everyone. DUH)
Rating: 5 Stars
5 stars reviews