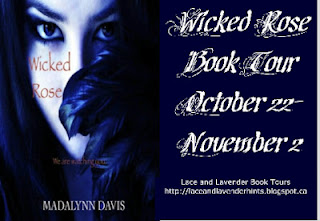 Title: Wicked Rose
Author: Madalynn Davis
Summary:
Still reeling from her father's murder, sixteen-year-old Noelle Hart returns to Whisper Preparatory Academy, an exclusive private boarding school in the sleepy town of Whisper, Connecticut. She tries to move on with her life, but things get off to a rocky start. Arguing with friends, dodging the overbearing Headmaster, and staying out of her nemesis' line of fire are almost her undoing. ​Until she meets Gabriel Merriweather. ​Over night, Noelle's luck takes a turn for the better. For the first time in her life, Noelle is the girl that every other girl at school wants to be. Once and for all, Noelle is able to step out of her older, perfect sister's shadow and be the center of attention. At last, her world is perfect. ​But, all good things must come to an end. ​When one of her friends is brutally murdered, Noelle becomes the prime suspect. Noelle's world is turned upside down when she learns that a secret sisterhood known as the Hive may be responsible for her friend's death and others. If Noelle and Gabriel cannot fight their way through the labyrinth of lies and secrets surrounding the Hive, then she may be next.

1. What made you decide you wanted to be a writer?
I have always loved to read and to write.  From an early age, I knew that I wanted to write a book one day.  I always assumed that I would be one of those gray haired writers who waited to write their first novel until much later in life.  But, a health scare in my twenties made me realize that tomorrow is not promised.  So, there is no better time than the present to realize your dreams.

2. How did you come up with the idea for Wicked Rose?
I would love to say something romantic like it came to me in a dream or something like that.  But, honestly, I just sat down at my desk one day and started writing.  The story just evolved from there.

3.      How did you feel after finishing your first book?
I wrote Wicked Rose over a couple of years and during those years, I experienced a series of life changes (ie:  health scares, transitioning from working full time to being unemployed, becoming a full time student again, etc.).  After all of that, I felt a sense of relief and accomplishment mixed with a little bit of fear regarding how the book would be received.

4.      Who is our favorite author and why?
Well, that’s a difficult question.  It is really difficult to narrow it down to one person.  I have a pretty eclectic palate but if I had to name a few, the list would have to have Maya Angelou, Jane Austen, Alice Walker, Charles Dickens, Gayle Forman, and Toni Morrison.

5.      Who is your favorite book character?
Another difficult question.  I honestly could not narrow it down to one character.  I identify with the underdog or someone who is forced to overcome some type of personal struggle or tragedy that ultimately shapes them into the person that they will become.  I definitely like a character with layers—someone flawed or a little scarred but who still keep pressing on.   Personally, I think that those qualities work together to create the best characters and people in general.

6.         Where do you get your inspiration from?
I love to people watch.  I generally draw a lot of inspiration simply from watching how  people interact with one another.

7.      What is the best advice you can give to aspiring authors?
Never give up your dream of becoming a writer.  Never.

8. How would you describe yourself in 5 words or less?
Tenacious, kind, gracious, funny, and patient.

Madalynn Davis is not your ordinary Southern Belle.  As an author, science teacher, and law school graduate, Madalynn wears many hats.  But, even in the midst of it all, she never forgot two of her first loves:  reading and writing.  When Madalynn is not teaching or preparing for the Bar exam (cringe), she can be found sitting in a quiet corner revising one of her current manuscripts and furiously scribbling down ideas that will hopefully turn into a new book.  Madalynn currently lives in Texas.   Wicked Rose is her first published novel.

You can see my review on goodreads, HERE.
Author interview Book Tour