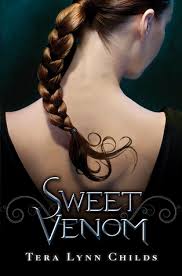 Summary:
Grace just moved to San Francisco and is excited to start over at a new school. The change is full of fresh possibilities, but it’s also a tiny bit scary. It gets scarier when a minotaur walks in the door. And even more shocking when a girl who looks just like her shows up to fight the monster.

Gretchen is tired of monsters pulling her out into the wee hours, especially on a school night, but what can she do? Sending the minotaur back to his bleak home is just another notch on her combat belt. She never expected to run into this girl who could be her double, though.

Greer has her life pretty well put together, thank you very much. But that all tilts sideways when two girls who look eerily like her appear on her doorstep and claim they’re triplets, supernatural descendants of some hideous creature from Greek myth, destined to spend their lives hunting monsters.


Review:
Well… I have heard of Tera Lynn Childs' mermaid books, but still haven’t read them. Then when I saw this one on a Kindle freebie list, I snatched it up.
The story follows three sisters, triplets, who are descendents of the Gorgon Medusa… however, they didn’t know about it at first. Their duty is to save the human world from “beasties” and send them back to their realm. Along the way, they have to figure out not only how to be “Huntresses” but also sisters…
When I started reading this, at first I was kinda disappointed. Firstly, I didn’t like Grace at all. She was annoying and petty, and a coward with no back bone. And I didn’t like reading from her POV.
Then came Gretchen, the badass super strong sister, who has been hunting since she was… TWELVE!! (what?)
And Gretchen and Grace find each other and try to figure what the heck is going on. Until they realize there are actually THREE of them… so they find Greer.
Greer is spoiled and lame and I didn’t like her either.
BUT- then things changed about…75% through the book.

Grace got stronger and really stood up for what she believed and her family (including the sisters she never knew she had)
Greer (kinda) put aside her spoiled selfish ways
And Gretchen allowed herself to love her sisters and let them in.
So, it was an ok story. I mean… random secondary characters came in and out. (they each had a love interest) I really liked Ursula!  Most of the story was just the sisters finding each other, which left little time for anything else. Hardly any action, very little romance. Not enough for anything else. The end got better… but it was already the end then.
I feel like the story could have been great, but kinda fell flat for me. Maybe it is targeted at a much younger audience than im used to reading… I mean, it is YA and the MC are 16, but they seemed much younger sometimes.
I also didn’t like seeing the story from ALL three of their POVs… I think it would have been more impactful from only one POV so you could really feel for one of them. Usually I LOVE when a story is told from multiple POVS, but not in this case. Maybe if it was longer and I got more time with each of them it would have been better… im not sure.
Overall, it was ok. Not the best, but has a great premise based on mythology. If I can get the rest of them free (when they come out) ill read them, but I won’t buy them. And now I’m kinda rethinking my decision to read her mermaid series.
Rating: 2.5 stars
Posted by Mrs. Jones at 3:53 PM