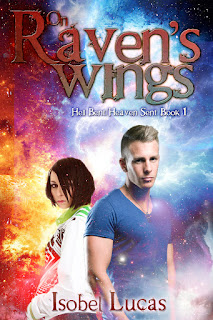 Summary:
Mary Joseph's family is going through a financial crisis and now she's forced to finish out senior year at the local public school. In an effort to erase her Catholic school girl image, she joins a rock band, gets a makeover from her best friend, and changes her name to Raven.
Ian, the hottest guy in school, notices her and she's plunged into a world she never expected to enter. His kisses are as steamy as his body, but Raven doesn't know if he's telling her the truth about his bizarre family or if he's just saying anything to convince her to go all the way.

When disaster hits Raven's family, she has to make a decision: ignore Ian's wild claims or take a leap of faith.

On Raven's Wings is the first episode in a series of five novelettes (10,000 - 15,000 words) releasing every two weeks starting October 23rd. Due to sex and language, this is recommended for readers 17 and up.

Review:
Let me start by saying that I don’t normally like short stories because… well they are too short. I like LONG stories, and series, with several books, so that the story can continue!

But, when I heard about this new series from this new author, I decided that since it is a series of short stories, it would probably equal one whole story and I would enjoy it.

Anyways, On Ravens Wings starts with you learning about Mary, who is the new kid in her first public High School. See, she has always gone to a private Catholic school. But now she wants to shed that “catholic school girl” image and just be herself.

With the help from her new BFF, Trinity, she joins a band, finds a new hot guy, and transforms.
There is humor and is exactly like what a teenager’s life would be. It felt very real.

Towards the end, you find out some serious revelations that will change Ravens life forever.
I thoroughly enjoyed this first episode, and am anxiously awaiting the next installment!!

Rating: 3.5 Stars. Its a good story so far and I cant wait to see where it goes.