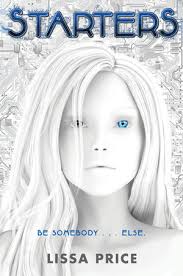 Summary:
HER WORLD IS CHANGED FOREVER
Callie lost her parents when the Spore Wars wiped out everyone between the ages of twenty and sixty. She and her little brother, Tyler, go on the run, living as squatters with their friend Michael and fighting off renegades who would kill them for a cookie. Callie's only hope is Prime Destinations, a disturbing place in Beverly Hills run by a mysterious figure known as the Old Man.
He hires teens to rent their bodies to Enders—seniors who want to be young again. Callie, desperate for the money that will keep her, Tyler, and Michael alive, agrees to be a donor. But the neurochip they place in Callie's head malfunctions and she wakes up in the life of her renter, living in her mansion, driving her cars, and going out with a senator's grandson. It feels almost like a fairy tale, until Callie discovers that her renter intends to do more than party—and that Prime Destinations' plans are more evil than Callie could ever have imagined. . . .
Review:
This book is not the typical YA dystopian novel, though it is similar to many. The story is told by our protagonist, Callie, who is a 16 year old unclaimed minor. This is not a good thing. See, after the Spore Wars, everyone between the ages of 20-60 were killed because they didn’t receive the vaccine in time. So now every person under the age of 19 is either a claimed (has a living relative older than 60 who claims them) or unclaimed minor. The Claimed minors are free to do as they please, and are not allowed to work- since before the war a law was implemented that no one under 19 could work due to the older people living longer and needing the jobs (people lived into their 200s now)
But Callie has no one, except her brother, Tyler, who is a sickly 7 year old. And her whole mission in life is to keep him safe and try to help him get better. She also has her friend, Michael, who is another unclaimed minor who stays with them and they work together.
Then you have Prime Destinations and the Old Man. Prime Destinations is a company that has found a way to let old people rent the bodies of younger people. They say they will get paid large amounts of money for just letting an older person rent their body for a short time.
This is very beneficial to Callie, who cannot work and has no money and wants to save her brother. But little does she know these people are not what they seem.

The author does a great job of weaving an intriguing and thought-provoking plot. Not only did I want to know what would happen next, I thought, what would happen if that were true? Would people ever let that happen? I mean, generally people are selfish beings, wanting what is best for them… for #1, no matter what. And it scares the crap outta me that in this world, the older, richer generation (some of them) were 100% okay with using teenage bodies just for fun and having no care about what would happen to that PERSON they used.
Super interesting concept!!
Anyways, the characters were great. I liked Callie. She wasn’t my favorite YA protagonist ever. but I still liked her.

Michael was okay, just like Blake. And of course, they were the love interests for Callie. Yes. Another freakin love triangle. Lame. But because there was so much going on with the world building, and everything else, the “romance” (if you can even call it that) was not done well enough for my liking.
Not to mention at the end… well, I don’t want to spoil it, but there was a twist at the end that was super creepy (not in a goblin under the bed kind of way, but like a creepy old dude kinda way)
About the last page- and that twist- I had been thinking and expecting that since about half way through the book… then towards the end, I thought I had been wrong in my guess (which was a bummer bec I love to be right) and then the last page. *kinda* proved me right.
Overall, there were many things I liked about this book, the story/plot, the interesting concepts (though similar things have been done in stories and movies before) and the idea it caused me to have. (or should I say nightmares…)
Rating: 4 stars (could have been five, without the triangle and either no romance or a substantial one)
4 stars reviews