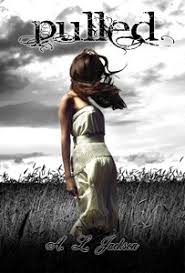 Summary:
Melanie Winters and Daniel Montgomery shared a love they believed bonded them together for life.  After the tragic loss of their daughter, overwhelming grief and misguided guilt distorts the truth, and their relationship ends in unanswered questions.
For nine years, they drift through life, each unable to forget the one who holds their heart.
Now, when their lives again intersect, will the power that drew them together be enough to heal the wounds from their past?
Pulled is a story of attraction and separation, of destiny and duty, of a love so strong it refuses to give up even when all others have.
Review:
I received this book free in exchange for an honest review.
So… when I got this book, I really had no idea what is was about, and went to read the summary. I was expecting something more like contemporary romance, but there was some weird things going on.
The story is about a woman and man, who as teenagers fell in love, got pregnant and then lost their child when she was born too early. This can be a very devastating thing. I had a miscarriage after having two children of my own, and that alone was devastating. I cannot fathom the emotions that would have run through me at carrying the child to five or six months and then giving birth, only for the baby to die. (I had my daughter when I was 16, and so I could seriously relate to some of the things in this story)
Then they separate due to parental issues and grief, etc. Only to run into one another 9 years later. It was almost like a case of fate. And that could have gone great in this story line- to have some paranormal aspect. Because they had some STRANGE connection.
I believe in true love and soul mates (hello, im an avid reader- I gotta believe in that stuff) but the love they shared was kinda creepy/weird. They could communicate through their emotions, even when miles apart. That’s not normal AT ALL. And im 110% okay with paranormal things in my book, but then, it’s a paranormal romance, and this isn’t supposed to be. Its just supposed to be accepted and normal.
This was the main issue I had with the book. The only other thing I didn’t like was how there were so many flashbacks, and the flashbacks (most of them…?) were italicized. I’m talking whole chapters, and sometimes more than one at a time. That was annoying too.
The characters felt like something out of a YA novel, though they were in their late twenties and were dealing with adult issues (childbirth, marriage, loss of a child, abusive spouses, etc)
Anyways, I still liked the story. Towards the end I really got into it. It dragged a lot at times, and I skimmed a lot of the boring internal dialogue. It was super cheesy. And again, I didn’t like the whole, “my soul sings for you, and when I miss you, you can hear me calling you from miles away… because our souls are telepathic or something” thing.
But still, I liked the idea of them finding each other. Of saving each other. Of having to deal with unplanned pregnancy more than once. I liked these issues.
Overall… it could have been great, but kinda let me down.
Rating: 3 Stars

Dont forget that Ill be having a giveaway as part of a giveaway blog hop on November 1st-9th!! Ill be giving away ANY book from the book Depository under $10 USD. This is an international giveaway, so come back in 2 days to enter!
3 Stars reviews