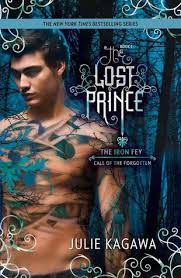 Summary:
"Don’t look at Them. Never let Them know you can see Them.That is Ethan Chase’s unbreakable rule. Until the fey he avoids at all costs—including his reputation—begin to disappear, and Ethan is attacked. Now he must change the rules to protect his family. To save a girl he never thought he’d dare to fall for.Ethan thought he had protected himself from his older sister’s world—the land of Faery. His previous time in the Iron Realm left him with nothing but fear and disgust for the world Meghan Chase has made her home, a land of myth and talking cats, of magic and seductive enemies. But when destiny comes for Ethan, there is no escape from a danger long, long forgotten."
Review:
I received this ARC from Netgalley in exchange for an honest review.
I must say, I was thrilled… beyond exsited to receive this ARC! I was very late on jumping onto the Kagawa Bandwagon, and only just read The Iron Fey series a few months ago.
I fell IN LOVE!
I love Ash, and Puck and Meghan! I love them all! And Ethan, though he was Meghans whole reason for doing everything she did, we didn’t see him much at all.
The Lost Prince is ALL about Ethan. It doesn’t start where the Iron Fey stopped, its actually years in the future, when Ethan is a teenager… a broody, mysterious, fey-seeing teenager. But he doesn’t want to see them, he wants to stay away from them, so they will leave him alone. Its just not that easy.
THEY know who he is. That he is the Iron Queens brother, so they think he can help them when something starts making them disappear.
I even enjoyed the love interest! As always, Kagawa makes you love the characters, every single one!!
To enjoy The Lost Prince, you should read the Iron Fey series first, though you don’t HAVE to.
Rating: 4 Stars!!
Posted by Mrs. Jones at 12:14 PM