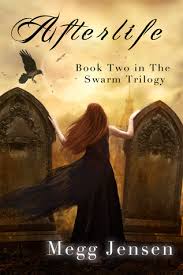 Summary:
The fire inside Lianne threatened to consume her, but she fought back and won. Unfortunately the collateral damage of her decisions won’t stop haunting her. She embarks on a secret trip to find Mags and return her son, but her search leads her into another nest of lies.

Everyone’s safety is in Lianne’s hands as the Malborn, an enemy more fearsome than her own people, looms over them. Will Lianne be able to unravel the secrets in time to save the ones she loves the most? Or will her lack of faith in her own decisions lead to disaster?

Afterlife weaves some of the favorite characters from the Cloud Prophet Trilogy (Anathema, Oubliette, and Severed) into The Swarm Trilogy as Lianne comes face-to-face with a character introduced at the end of Severed.
Review:
In Afterlife, you start off right where the last book stops. You continue the journey with Lianne as she tries to figure out who she can trust, who the bad guys are and how to defeat them.
Plot: This story was very good, however
I felt that it was very rushed at time. She didn’t give enough detail or explanation about many things that happened here. Lianne and her friends went from one thing to the next, to the next. Everything moved too fast. I think the story if only 50000 words or so, when it should have been more like 80000. There is just too much missing.
You do still get to see the blossoming romance between Lianne and Bryden. You meet some new characters, Chase and Johna. However, I felt like everything that happened was expected-very predictable. There were no twists and turns like I loved in the first book.
Characters: Lianne, Kellan and Bryden all return. Chase has the ability to see vision in the future and draw them. He has known Lianne throughout her whole life through his visions and loves her, though she loves Bryden. Chase will probably be my favorite character from now on. However, he also lies to her, just like everyone else.
Romance: You have another triangle in this book. In the last book it was Bryden-Lianne-Kellan. But we discovered the Kellan is a bad guy. So this time it’s the new guy, Chase with Lianne and Bryden.  The romance really fizzled out for me though. I didn’t really feel anything for them.
Overall, It was a good book but I was very disappointed. I loved the first one.  The characters, the development, the romance, everything. This one felt so rushed. There were a lot of grammatical errors (the few in the first one could easily be overlooked)  and I felt like there could have been so much more to this story.
I wasn’t a horrible book- I just wanted more and expected more based on this author’s other books.  I will be awaiting the final installment in this trilogy, and I hope it lives up to the first book.